Last week, we watched as President Barack Obama took the oath of office for his second term. 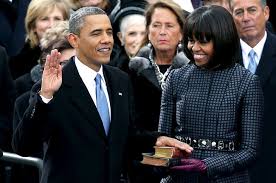 With traditional pomp and circumstance, the activities in Washington lit up the twitter feeds.  Even Twitter couldn’t handle the overload of commentary; the platform crashed for up to six hours for many users.  An estimated one million people gathered in Washington to watch the President take the oath of office.  I can’t begin to imagine the number watching on television, computers, tablets and smartphones.  And even though my friend Ted might disagree, I have to believe that many of those people were interested in much more than Michelle Obama’s fashion choices.  (Ted, your tweets were spot on!)

President Obama spoke eloquently, as was expected.    You can read the text of his speech here:

One line in his speech continues to draw my attention:  “We do not believe that in this country, freedom is reserved for the lucky, or happiness for the few.’  I agree.

As many of you know, and others suspect, I am an independent voter.  I am not ashamed to admit that I do not have all the answers, and as a result, I try hard to listen to rational arguments offered by each side on issues of importance to our community and our nation.  I embrace the fact that freedom is a hard fought battle; am I am forever thankful for those who continue to fight for those freedoms – whether those battles are fought by our military, or in our nation’s courts, or on the streets of our cities

Happiness – now that’s a loaded statement.  I agree that happiness is not reserved for the few.  I believe that every person, created in the image of God, holds the key to happiness.  We read it in Matthew’s gospel, “Blessed are the poor in spirit, for theirs is the kingdom of heaven.”  (5:3)  In the biblical studies world, there is general agreement that Matthew wrote to Jews who had been waiting about 10 years – waiting for a Messiah to solve their communities’ problems – not realizing that they possessed internally all they needed for happiness.

Sounding familiar?  There’s a rumbling in our nation that is similar to the rumblings in the community to whom the Gospel of Matthew was written.   “Make me happy,” we seem to say.  The ancient community shouted for a Messiah, an individual who would solve all the world’s tangible problems.  Fast forward thousands of years, we say it to our televisions, to our jobs, to our computers; and, in his inauguration speech, President Obama seemed to imply that some seek it from the government.

Let me restate:  I believe a government should protect the freedom of its citizens.  I believe the government has a responsibility to fight oppression, defined broadly to include military oppression or social oppression.   I support the very needed efforts of my friends who are camping out in Austin, TX this week, protecting those freedoms.

That’s a far cry, however, from expecting the government to be the source of my happiness.  That happiness comes from my relationship with God, the Creator; with Christ, who redeems me and who set the example for building community on earth; and with the Holy Spirit, which sustains me as  I find ways to build that community for those who are in need.

Not just freedom for the lucky, or happiness for the few.  Each belongs to all of humanity, perhaps just not in the way the text of President Obama’s speech was intended.

In all things, love.

One thought on “Freedom for the Lucky, Happiness for the Few”